The apiculture of Adam is a family owned business already for five generations. The company was founded in the year 1860, when Andrew (a pioneer on the field of beekeeping in New Zealand) donated a few beehives to his cousin and his wife: Adam and Lucy. This is where the passion of Lucy for beekeeping started to grow. Her youngest son Bill overtook the beehives and moved to central Otaho in 1930, because of the many clover plants that were growing within that area.                     After some time had passed the two sons of Bill, Ernest and Walter took over the beekeeping business. The two brother decided to split the company into two where Ernest moved to Alexandra with his bees and Walter still has an apiculture with roughly 1500 beehives located in Wedderburn. His bees are mainly flying in fields of clover and thyme.

The apiculture of Adam was established in 2008. When he came back together with his wife from a two year voluntary project in Tanzania, east Africa they decided to buy the hives from the parents of Adam. Currently they are owning 550 beehives in central Otago and are still cooperating with Walter. The honey of Adam has been organically certified since 1995 but they have been producing their honey in an organic way already since the 90’s. Adam and his wife are fifth generation beekeepers.

30% of the surface of New Zealand exists out of protected areas, like national parks and nature reserves. This percentage is much higher than in other countries, this ensures that much of the native vegetation grows in these places. These pristine parts of nature ensure that the residues in our honey are very low.

The bees of Adam are mainly flying on Manuka, wild thyme and clover. The clover plants grow on the high mountains and valleys and  the wild thyme on the dry hills of Alexandra and Cromwell. The certified Manuka honey is a unique variant of honey and is being collected every season by the bees from Adam. 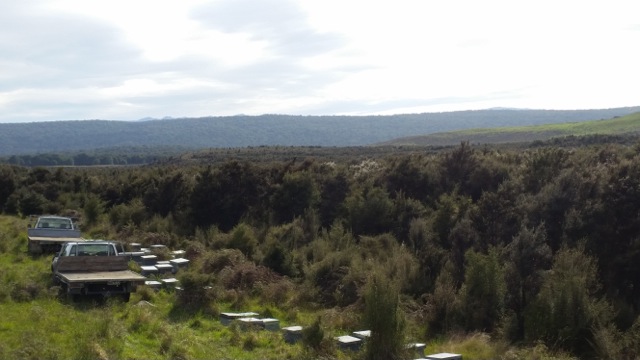